Roborock’s amazing line of robot vacuum cleaners take the dull chore called cleaning out of your daily routine and unlike other premium brands such as Neato and Roomba, Roborock doesn’t weigh your decisions over price. Their premium models offer amazing value.

In this post I want to focus on just that, Roborock has a long list of great products that offer great cleaning performance to suit all budgets. But in this post, I’m going all-in on the flagship models as I compare the Roborock S6 vs S6 PURE VS S6 MAXV to make your buying decision a little easier.

The Roborock MaxV is the easy choice since it tops the other two options in every single department. However, it is backed by also being the more expensive option. On that note, people with a lesser budget for robot cleaners are more likely to opt for the cheaper, but the extremely rewarding option of the S6, or its watered-down version – the S6 Pure.

Whatever your choice, all of them are worth more than your outlay, and considered elite-class among other robot vacuums to prove it. 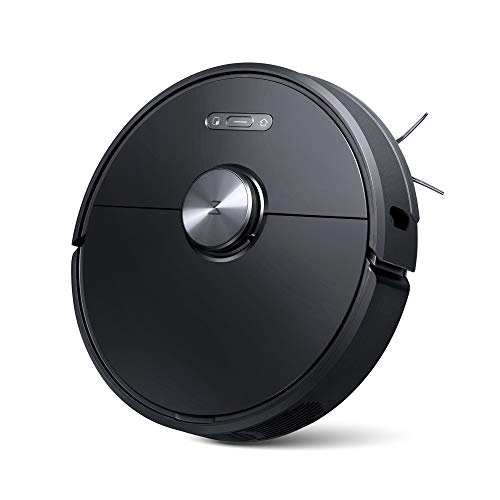 With the Roborock S6, the company upgraded their navigation game up a bit with a Smart LDS Navigation system instead of the Lidar Navigation system on the S5 model. The Smart LDS system boasts 14 sensors of different types to help draw out high-level cleaning ability that’s only made better by an unnecessarily intelligent 32-bit quad-core processor for its LIDAR navigation – a brutal combination that pushes the intellect of this cleaning robot towards genius. And to top it off, the bot is guided using a high-precision laser – the manufacturers were clearly having fun during that R&D brainstorming session.

This mop hybrid continues Roborock’s unending romance with powerful suction at 2000 Pa that’s as quiet as it is impressive. The unit has the backing of a 5200mAh battery that helps it stay awake and at work for more than 150 minutes after full charge. Additionally, the robot has an auto-charge feature so you don’t have to worry about the bot getting to full charge. Once the power is low enough, the robot will automatically find its way to the charging dock for fuel.

There are very few downsides to this robot too. One can only note the lack of control over mopping areas and the low compatibility it has with personal assistants like Amazon’s Alexa. And that restricts its function to just a few superficial tricks. 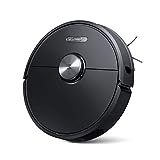 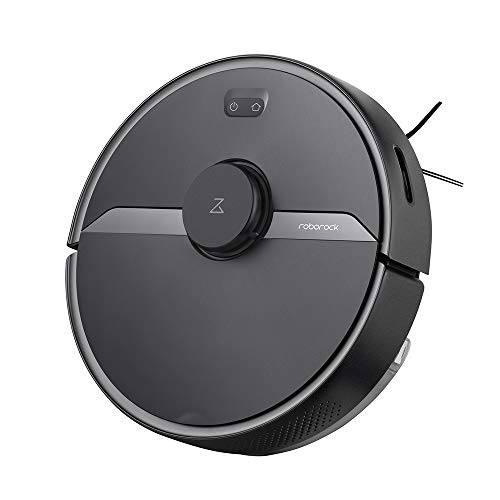 It doesn’t take a genius to figure out that the S6 Pure was made to be better than its predecessors, and Roborock successfully accomplishes that.

The scheduled cleaning option is one the Pure version has, along with an intelligent mapping system that works well to remove the areas you don’t want your mopbot working on.

Another intelligent plus is Amazon’s Alexa, which is programmed with the Pure to make cleaning a more integrated process for the user. No need for deliberate app launching, just speak to any Alexa-enabled device and get the cleaning party started.

The only thing that was upgraded a bit was the size of the water tank and the dust chamber, but that does nothing to arrest the regression that is evident in how much more time is needed to charge the S6 Pure to full capacity – 6 whole hours!

Of course, the downgrade could have been the intention of the designer anyways. And the fact that it’s cheaper than the S6, despite being newer, goes a long way to tell as much. The manufacturers also hinted that there was a reduction in the number of sensors, so we should have all seen it coming, really. 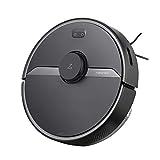 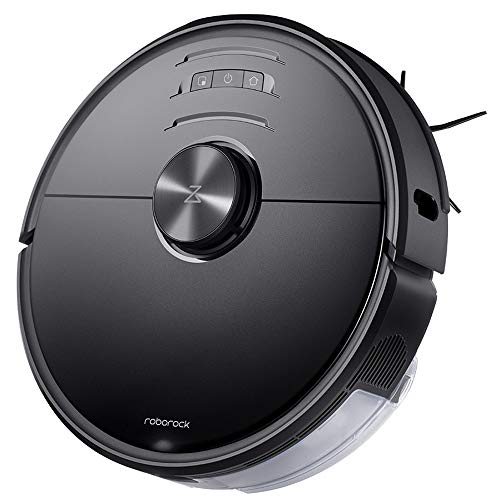 The Roborock S6 MaxV is usually only available in the color black. Also, the S6 MaxV dominates the Pure and other roborock robot vacuums in every spec category, starting from its tank size that’s almost twice that of the S6 Pure at 300mL compared to the 180mL of the S6 Pure.

The S6 MaxV boasts 2,500 Pa suction power that overcomes fine dust and does deep cleaning with ridiculous ease. Mopping and vacuuming simultaneously with the MaxV is possible, and the mopping capability includes the no-mop feature that restricts cleaning activity of the robot when it’s at work. There’s also the Qualcomm APQ8053 64-bit octa-core processor that powers the LIDAR navigation system of the robot speeds that other Roborock robots can only dream of.

The robot also has self-charging capability as support for when its 180-minute runtime is almost over or won’t be enough to clean a room. You can set up to 4 maps in the robot, as well as connect it other devices in your smart ecosystem. The MaxV also has an electronic mopping feature that grants the user more flexible control over the amount of water through the companion app. Unfortunately, controlling it using assistants like Amazon’s Alexa is not a complete experience.

In fact, think of the Roborock MaxV as the twin of the S6, only bigger, better, and appropriately less cheap. 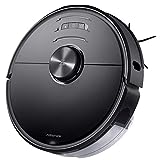 What Do They Have in Common? – Roborock S6 vs S6 PURE VS S6 MAXV

The design team can pat themselves on the back for the custom red sweeping brush appendage on these cleaning robots for cleaning the edges all over the house. There’s also little difference between the three robots if not for the color schemes they are available in and sizes. They have the same modern look with a minimalist faceplate with the same height and weighing the same.

Roborock devices are not toys, they are big on pulling out every speck of dust from your living space and that’s something you can achieve with the 2000 Pa they all boast. More than enough for hard floors and carpets.

The three robots use an E11-rated filter to take care of their dirty work. That means 95 of 100 allergens gets captured with each use to keep the air as pure as possible. You can rewash the filter for the three robots and they easily outlive the filters you’ll see in most robot vacuums.

We already know the bots can mop and vacuum, but they can do both at the same time too. While the E35, S4, and E25 versions used gyroscopes and motion tracking sensors. They have robust navigational tools to clean the home efficiently. Key to this is the intelligent navigational system algorithm that plots the best routes for the robot to get the cleaning done in the shortest times possible with superb efficiency.

The three bots last for 180 minutes while working, but if they calculate that the cleaning won’t be complete with the runtime they have left, they’ll automatically report back to their charging docks for extra power before they resume work.

Unlike previous versions that used the Mi Home App, these babies use the new and improved Roborock app. The Roborock app is a lighter app that’s used for just the operation of the vacuum and their setup, and that has made the user experience more seamless and intuitive than the Mi Home app ever was.

Also, the Roborock app has opened the way for new features like Room Selection, Alexa compatibility, No-Go Zones, and Zone Cleaning. This means that users can now program the robot from going on a cleaning rampage through virtual boundaries, select the specific rooms or zones you need cleaned, and join up with the rest of your Smart Home setup through Alexa.

There are some drawbacks, though. For one, you can’t use the app on tablets, and it only works for one robot. And that’s why many people have run back to Xiaomi app.

The three robots look alike, but there are some notable differences that greatly affects their functionality. The Roborock MaxV, for instance, has two cameras strategically placed in front to aid the navigation prowess of the robot in obstacle avoidance.

In contrast, the S6 Pure has no camera – it’s a blind robot – but it has its defining bits. There’s a column that goes on either side of the turret, and two buttons while the others have three. The S6 on the other hand has no silver ring around its plastic scratch-resistant body.

It only stands to reason that the MaxV with its 64-bit octa-core Qualcomm processor chip performs with greater strength and speed than its rivals that both have 32-bit Quad-Core processors. That get worse for the S6 Pure in the competition as it relies on infrared distance edge sensors where the S6 and S6 MaxV make use of LIDAR navigational system to further improve their precision during navigation.

The MaxV also has the edge when it comes to the suction power that Roborock is known to provide, with its 2500 Pa suction power the most of the three. Also, the S6 and the S6 Pure are recorded to cover 2,153 feet (200 meters)

The dual cameras of the MaxV places it at an advantage when it comes to navigation, add the ability to save up to four maps and its numerous LIDAR sensors and you have the best unit for self-sufficient automatic cleaning. In clustered rooms, the MaxV glides gracefully across spreading cleanliness. The S6 and the S6 Pure might not be able work in those extreme conditions but they do a great job nonetheless.

The S6 Pure comes with a smaller 460mL dustbin compared to the S6, which has a 480mL capacity, and the MaxV also interestingly has a smallest bin. Then, the S6 has a 160 mL water tank capacity. The s6 Pure has a 260 mL water tank and the MaxV has the biggest water tank of size 300 mL -as it should.

Premium features come at a premium, that’s only natural. With Roborock, though, even the MaxV does not come with a heartbreaking price tag. That goes to show how affordable Roborock has made first-class cleaning robots that can puff their chest at being just as good as the robot cleaners that cost the big bucks, or even better given how quiet the Roborocks are.

Of course, the S6 and S6 Pure also stand as solid alternatives to the MaxV. They both have powerful features that will be rated at least 4.5 stars out of 5 for ease-of-use, precision, performance, battery life, and heartwarming beauty. Just like the MaxV, they also have washable filters and easy-to-remove side brushes for easy maintenance.

Buying anyone of them guarantees that at least, you can rest assured that you’ll be getting a robot vac with 5200mAh battery for 150 minutes of runtime, 2000 Pa of suction power that works at the silent grace of 60Db and ready to cover 200 meters of room cleaning. There’s no better deal in the world of robot cleaners!

About the Author: Matt Hulland