Multitasking is the norm in today’s society and that’s why even in consumer tech, we are veering towards products with flexibility and versatility as selling points. I guess this is why the Roborock S7 and Eufy Robovac L70 Hybrid receive so much attention. These two robot vacuums have been making headlines since their release.

So today, we will be comparing the Roborock S7 vs Eufy L70 Hybrid to see if these two live up to the hype. Read on and let us help you make an informed decision. 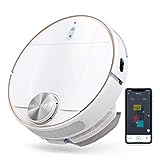 The Roborock S7 and Eufy L70 Hybrid are sophisticated robots, but there are many factors that prevent them from being equal. Despite using the same laser detection system, the latter has fallen a few steps behind.

Both models clean in vertical rows before it proceeds to clean in horizontal rows. Strangely, the Eufy L70 Hybrid always tends to steer towards a particular corner of a room and repeatedly cleans that area. These redundant movements only waste battery life. Another non-standard LiDAR behavior it has is pushing light objects, such as chairs.

Don’t get me wrong. These labor-saving gizmos are both powerful suckers, but the Eufy L70 Hybrid has shown difficulty when dealing with numerous obstacles, rearranged furniture, and unpredictable pets in the real world. Likewise, the EufyHome app is much more limited than we would like for a LiDAR robot vacuum.

In a nutshell, the Roborock S7 is the clear winner in this robot vacuum face-off. This hybrid not only improves standard features but it also takes mopping to the next level mopping. Unless a new model bests its mopping features, it will be holding its title as the best robot vacuum hybrid for a while. 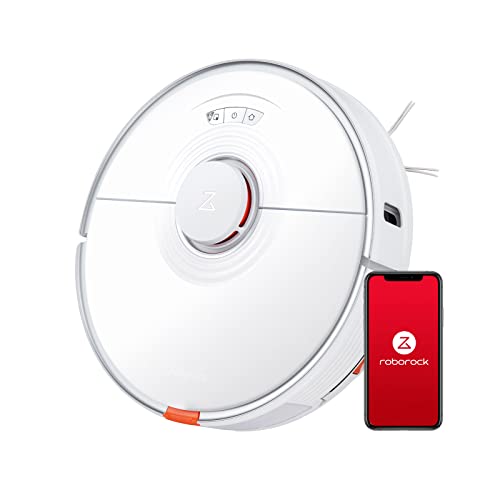 The Roborock S7 is the first robot vacuum cleaner hybrid that you can actually trust. With its carpet detection and auto-elevating mop plate, you won’t have to worry that your robot might be running wet and wild while you’re away.

While previous hybrids provide so-so mopping performance, it steps it up a notch! Maybe the robot won’t delete coffee dregs and dried mud, but it’s perfect for wiping off fresh stains and spills to keep your floors squeaky clean.

The 2500 suction power combined with its re-engineered main roller makes for a solid, fast-cleaning vacuum with tons of in-app customizations and multi-floor mapping.

You can read more about the S7 in my full review post here, or see how it compares with ists siblings where we compare the Roborock S7+, S7 MaxV and S7 MaxV Ultra. 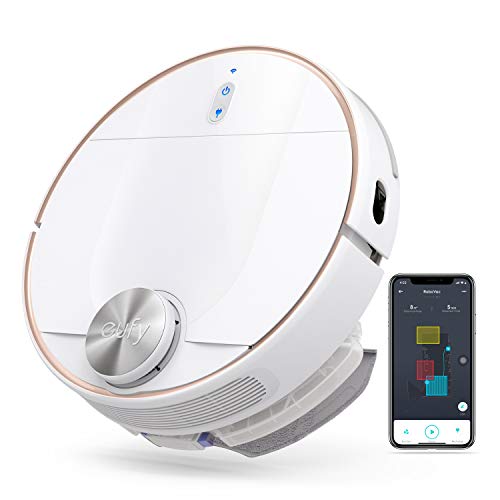 The Eufy Robovac L70 Hybrid robot vacuum cleaner is one of the most affordable LiDAR robots to date. With an upgraded laser mapping system, it solves several pain points that its predecessors had, thus making it more proficient in cleaning. And through the EufyHome app, you can set virtual boundaries, control scheduling and select cleaning modes.

While this model leaves much to be desired, it boasts of 2200 Pa of suction power. This robot picks up all sorts of debris on carpet, hard floors, and edges impressively. Plus, it has a decent bin size for containing all that dirt.

You can read more about the model in our product review here.

Right off the bat, you will see that these two robots have a little turret denoting that they are LiDAR-powered models. The laser sensors scan each nook and cranny of your home in 360 degrees, and all the coordinates collected shall be transmitted into a digital system within the robots. The beauty of these robot vacuums is that they can work at night or in low-light areas as efficiently as they do during broad daylight.

As with any robot vacuum in the market, these models will eventually show signs of wear and tear, and you will need to replace parts, such as:

On the bright side, these accessories are durable and with proper care, you don’t need to keep buying replacement parts each year.

Roborock and Eufy did not deviate from the typical round profile for these models and they both sport a white glossy look.

The only difference is that the Roborock S7 has a concentric ripple pattern around its LiDAR turret, which probably represents its Sonic Mopping Technology. On the other hand, a rose gold accent rims the top surface of the Eufy L70 Hybrid.

While the Roborock S7 is a tad smaller and lighter than the Eufy L70 Hybrid, these differences are negligible and therefore, do not give the robot the upper hand in terms of coverage.

How big is the Roborock S7?

The Roborock S7 measures 13.8 inches in length and width and 3.8 inches in height. This robot weighs 8.2 pounds.

How big is the Eufy Robovac L70 Hybrid?

The Roborock S7 runs at an average of 67 dB, which is not quite as loud as an upright vacuum cleaner. Even when your robot cleans, you will enjoy spilling the tea with your guests.

The Eufy L70 Hybrid, on the other hand, is rated at 57 dB, which makes it an even quieter robot, so be wary of people eavesdropping!

I was never impressed with robot vacuums with 2-in-1 capabilities because they really don’t offer the best of both worlds… until I got my hands on the Roborock S7!

While both robot vacuums feature integrated mopping functions, the Roborock S7 has the upper hand due to its Sonic Vibration. It is basically the same kind of tech powering your toothbrush — except that it vibrates an insane 3000 times per minute!

Adding to that are Ultrasonic Carpet Recognition and VibraRise. As soon as the robot vacuum detects the carpet, it raises its mopping template to prevent the fabric from getting damped.

On the contrary with the Eufy Robovac L70 Hybrid, you will have to draw no-mop zones on your phone to prevent it from climbing rugs. Doing this is vexing because there is no way you could accurately guess where your carpet starts or ends. Above all, the lack of scrubbing means the mopping pad is merely dragged across the floor.

And although this robot vacuum gets a hybrid moniker for its mopping capability, it sadly doesn’t mop and vacuum in one cycle. You will need to remove the dustbin, rinse it out, and fill it with water before you proceed to attach the mopping template.

The Roborock S7 hosts a 470 ml dustbin, which is enough to clean a 550 square feet apartment in one go. Even when the canister was jam-packed with pet hair, its motor never slowed down and its chute remained clear. Likewise, the 300-ml water tank holds a satisfactory amount of liquid to erase my dog’s muddy footprints and counter-surfing evidence for up to three days.

Meanwhile, the water tank of the Eufy L70 Hybrid can only hold up to 150 ml but if you set the water flow to its lowest, there will be enough liquid to mop 800 square feet of area. At 500 ml, this robot vacuum has a bigger dustbin to make up for its small water tank but unfortunately, it is difficult to access.

The Roborock S7 has strayed away from the conventional brushroll and uses a finned, all-rubber brush to cut back on hair-tangling. As such, you don’t have to perform maintenance as often as you used to.

The Eufy L70 Hybrid, on the other hand, is still using the squeegee and bristled combo. I find this brush quite unfavorable when picking up long strands of human hair. While most of the pet hair collected went straight into the dustbin, about 90% of human air was left coiled in the bristles.

The Roborock S7 actually doesn’t even need to generate a lot of power because its upgraded design creates an excellent seal. That is why this robot vacuum has better dirt collection in crevices than its competitor.

When fully charged, the Roborock S7 can run up to 180 minutes before it needs to head back to its station. Meanwhile, the Eufy L70 Hybrid has a maximum run-time of 150 minutes.

Using the EufyHome app, you can add multiple no-go zones to prevent your robot from crossing tricky areas of your home. Likewise, you can instruct your robot to clean specific zones and schedule cleanings. The Eufy L70 Hybrid also supports Amazon Alexa and Google Assistant.

Unfortunately, those are all you can do and this robot vacuum can only generate one map. That alone is a deal breaker if you live in a two-story house.

If you want a robot vacuum with multiple floor plans, the Roborock S7 is your best bet. The Roborock app offers a slew of nifty options, such as:

There is a whole set of settings you can play with the app. There is even a child lock to stop the buttons from working and the ability to connect the S7 to Alexa or Google Assistant.

Does the Roborock S7 vacuum and mop at the same time?

Yes. Unlike the Eufy L70 Hybrid, the Roborock S7 can vacuum and mop at the same time. There’s no need to remove the mop bracket.

What is the difference between the Roborock S7 and S7+?

The only difference between the two is that the latter comes with an auto-empty station whereas the base for the Roborock S7 is limited for charging.

Unfortunately, no. This model lacks advanced obstacle avoidance features that the Roborock S6 MaxV have. You need to clean up after your pet before initiating a cleaning cycle.

Can you use the Eufy L70 Hybrid to map your second floor?

Theoretically, yes. On the downside, the robot will have to overwrite its current map since it can only save one floor plan.

Will the Eufy L70 Hybrid work with existing magnetic strips?

If you have already laid no-go zones using magnetic tape markers, the Eufy L70 Hybrid will respect those boundaries.

To wrap this all up, I will say kudos to Eufy for making the leap with the L70 Hybrid, which is its first LiDAR-enabled model. However, this model is still a far cry from its top-shelf competition. If you compare the Roborock S7 vs Eufy L70 Hybrid, the differences are day and night.

You could easily mistake the Roborock S7 for the Roborock S6 MaxV, although the S7 lacks the front-mounted cameras for better obstacle avoidance that the S6 MaxV have. Regardless, its features are game-changers, especially its mopping function.